As a large manor farm Westdean has been home to several high-ranking families. No Roman evidence has been found in the village but, after the Romans left in AD 411, there is evidence of a well-established Saxon farmstead. One road, leading to and from the village, is a typical Saxon landscape feature and the Church of All Saints still has a Saxon light in the north wall. It has been claimed that Alfred the Great had a Royal Vill in Westdean in the ninth century. In his Life of King Alfred (published in AD 893) chaplain and biographer to King Alfred, Bishop Asser, states that ‘I first saw him in the royal vill which is called Dene’. However, several other Deans or Denes fell within the Kingdom of Wessex during Alfred’s reign, for example, West Dean in West Sussex and West Dean in Wiltshire. A ‘dene’ (derived from the Old English ‘denu’), used to be a common name for valley and was frequently found as a component of English place names in the form of ‘dean’. An upcoming archaeological dig in Westdean, East Sussex may shed further light on these competing claims. 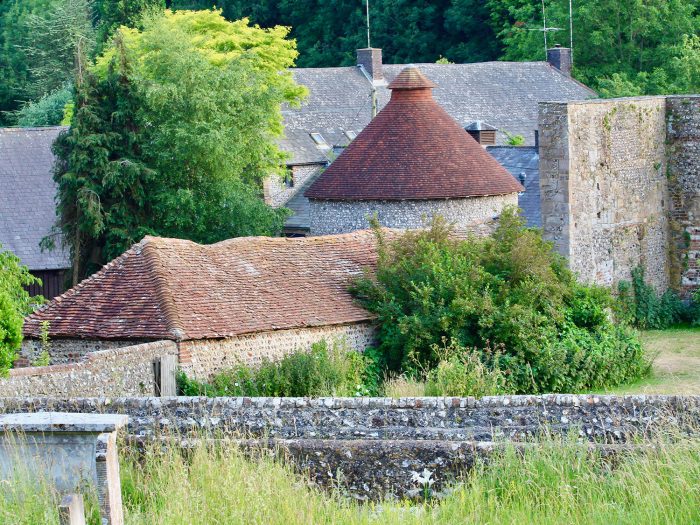 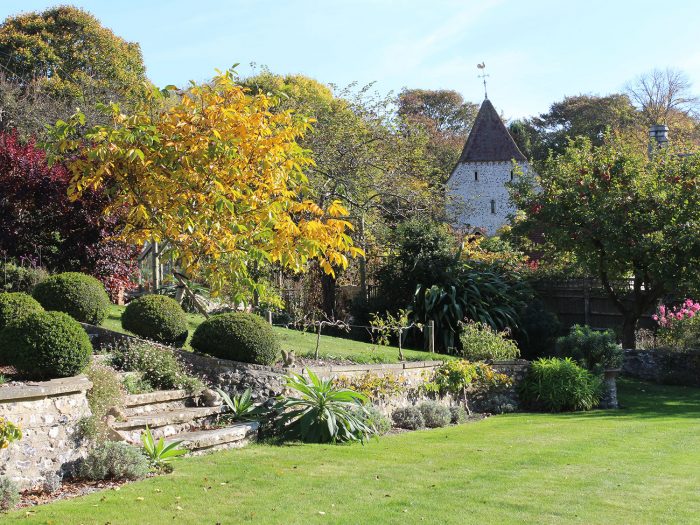 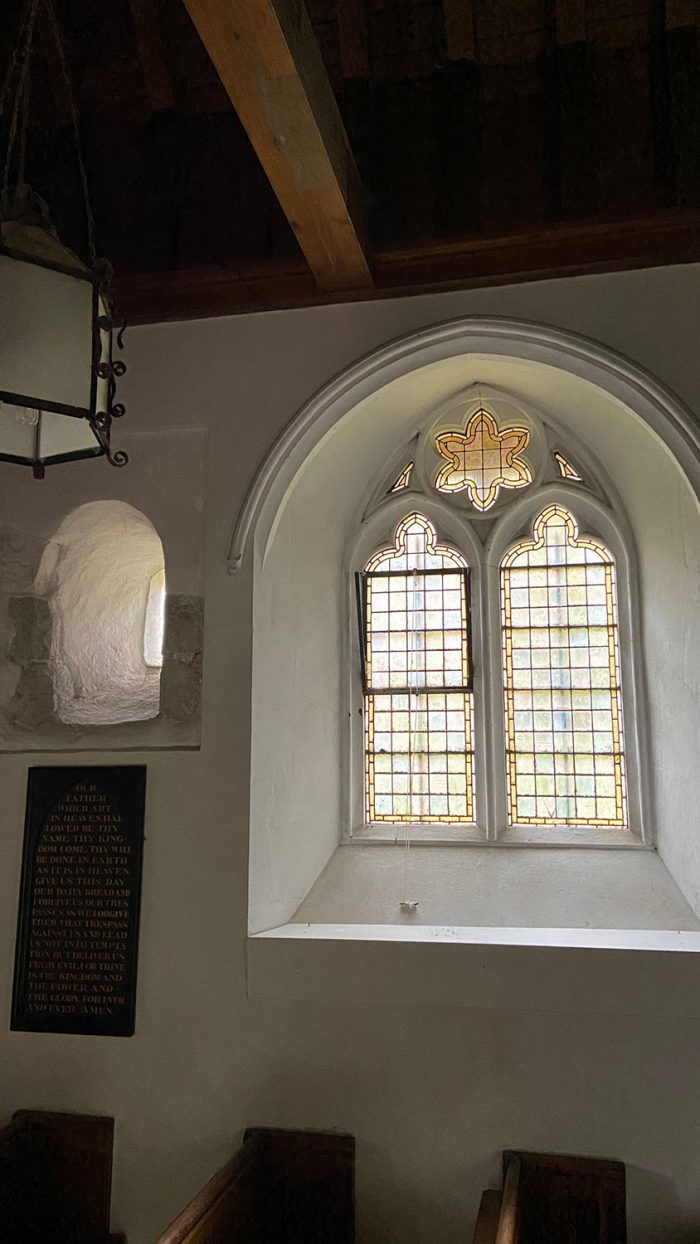 From the Norman conquest in 1066, the coast settlements looked across the Channel to France for trade and culture. The channel became a conduit rather than a barrier. William the Conqueror’s half-brother, Robert Count of Mortain, from Normandy became the owner of Westdean. The Domesday Book of 1086 records that the Norman lord, Ralph, held the manor for the Count with ‘eight hides (the Saxon measure of land needed to sustain one family), ten ploughlands, eleven villiens (feudal land tenants), four bordars (tenants with cottages) with three ploughs, three slaves and four salt pans’. Ralph would become progenitor of an important Sussex family, the Denes. The Domesday Book also records land ownership before the Normans arrived, when the Saxon thane Azur held a manor of eight hides for Edward the Confessor. Essentially a list of tax due to William the Conqueror, it states the taxable value of Westdean before the Conquest (£7), after the Conquest (60 shillings), and 20 years later in 1086. (100 shillings). We can assume Westdean was quite heavily depredated by the invading Norman forces but had recovered some of its value by 1086 under Ralph.

The reference to ‘four salt pans’ is significant. Salt pans were shallow, artificial ponds fed with sea water in order to extract the salt through natural evaporation then boiling. Salt was a valuable commodity in early medieval times, and this process of extraction had been practiced for generations throughout the tidal marshes of Sussex. The salt pans probably survive as meadows near to the bridge on the A259. Count Mortain gave the tithes from the land together with nearby Exceat to the Monastery of Grestain near Honfleur in Normandy, founded by Count Mortain, William I, and Bishop Odo of Caen in honour of their mother.

The signs of a large manor farm abound in Westdean. The remains of the main Norman-era Manor House, situated in the field opposite the Parsonage, are now below ground level but the sturdy stone stairway to the cellar is still in place. The remains were last excavated in 1969 but the record is lost. The Norman-era dovecote is another reminder of the mastery of Norman building. It was conserved with the help of English Heritage in 2009. This included the fitting of a new roof, repairs to the chalk nesting boxes and the potence. A potence is a revolving ladder that facilitated the collection of eggs, adult birds and squabs (pre-fledged birds) from inside. The Parsonage was originally a Priest House dating from around 1280. It is built of stone and flint with a spiral stone staircase, huge oak beams and lancet windows deeply splayed on the inside. At one stage, it was split into two farm households but in the Victorian era it was sympathetically restored and extended as one house. A former reverend of the parish, George Miles Cooper, wrote in 1849 that the reason for this building’s survival was ‘partly accounted for by the seclusion of its situation…the village of Westdean is, and always has been, extremely small, the population at present being only 129: it is embosomed in the hills with no public road through it; a striking example of a sequestered Southdown hamlet.’ 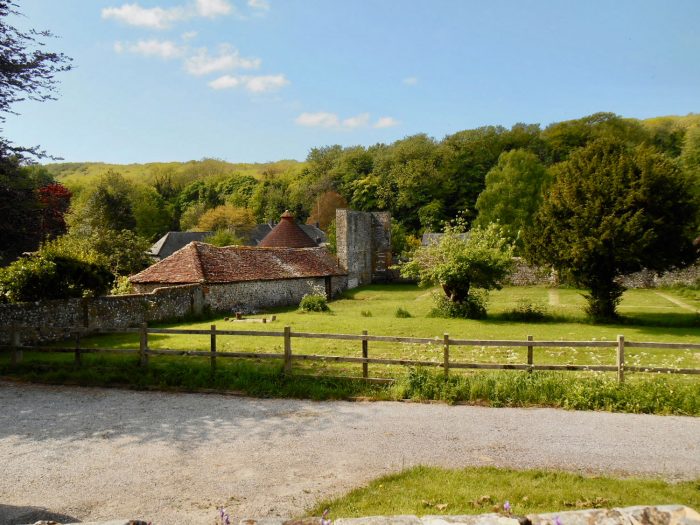 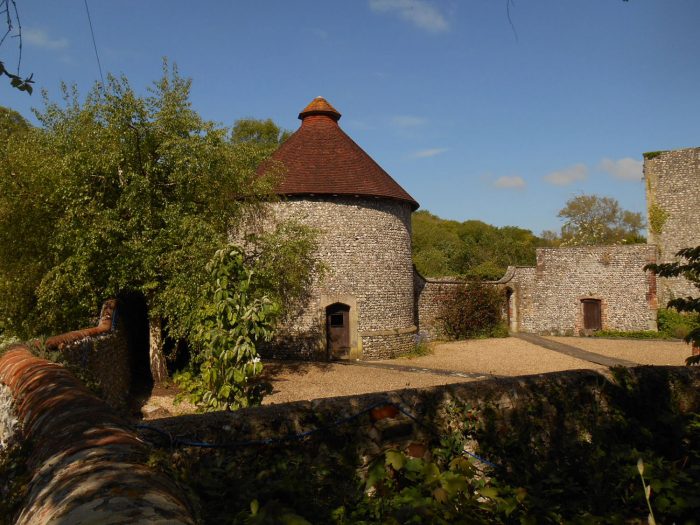 The medieval era brought trade and wars with France. Around this time the pond was a small loading area for boats importing and exporting goods bound for France, a reminder of the superior quality of wool and woollen goods produced on the South Downs. During the twelfth century, Westdean and Exceat paid more in taxes than nearby Lewes. The villages were probably associated through Seaford to the privileges enjoyed by the coastal confederation of the Cinque Ports (five harbours – Sandwich, Romney, Dover, Hythe, Hastings – originally grouped together under the Saxons for defence purposes). In the summer of 1305, King Edward I, who was at nearby Lewes, visited the villages of Westdean and Exceat to raise men and funding for war. In the early 1300s the Heringaud family developed the manor of Westdean and the Poynings family followed after them. During the Hundred Years’ War (1337-1453), when the French throne was claimed by Edward III, over four generations of these families fought as Barons at the battles of Crécy, Poitiers, Orléans and Castille. During the war, there were devastating raids on both sides. French raids, along with the Black Death and storms saw Exceat village, to the south, abandoned by the 1450s and amalgamated with Westdean.

The Bray family and their relations owned or tenanted the greater part of the parish by the late 1500s and would have been seen as the manorial lords. They had strong ties with the coastal communities of Winchelsea, Hastings and Pevensey and had acquired an important part of Westdean from the piratical tribe of seafaring Alards in the 1430s. However, by the beginning of the seventeenth century following a slew of poor harvests Thomas Bray, Lord of Westdean manor, sold the estate. The elderly Lord Bray, a former lawyer of Staples Inn in Holborn, sold to a fellow lawyer, William Thomas, then a young attorney in the county town of Lewes. William Thomas was not a Lewesian by birth but rather the son of a London merchant. However, records show that the Thomas family had, in fact, been tenant farmers in West Firle, Sussex since the 1400s. William’s father, Thomas Thomas, had left the manor of Heighton in Firle by the mid-sixteenth century to become a merchant tailor in the parish of St Magnus Martyr in one of the buildings that then stood on London Bridge. William had been admitted to Gray’s Inn in 1600, and a year after his father’s death in 1602 was already practising as an attorney in Lewes back in the ancestral county of East Sussex. The following year he was able to buy an imposing townhouse for £225 on School Hill in Lewes and marry Anne, heiress of the Michelborne family. He continued working his way assiduously and with remarkable speed towards a prominent position in the county’s legal circles, amassing a formidable portfolio of positions including that of Clerk of the Peace for Sussex in 1615. In 1610, at the age of 30, he began the process of consolidating his assets by buying up the village of Westdesn in the Cuckmere Valley. By 1615 he had bought up the lion’s share of Westdean, combining three manorial units that had been in separate ownership since at least the thirteenth century. He also set about extending the Manor House. Granted Arms in 1608, he became Lord of the manor of Westdean in 1611. His legacy would continue well into the eighteenth and nineteenth century, resulting in a small empire of land ownership that would reach from Sutton and Seaford in the west through Westdean to Folkington in the east. Much of the family property was acquired by William’s son, William Thomas II (1618-1654). Astutely, the family negotiated the Civil War, emerging with their assets undiminished. The third William Thomas (1641-1706) was made a baronet at the Restoration. He was also Justice of the Peace and MP for Seaford from 1661, a post he held for the rest of his life, apart from the years he was elected MP for Sussex. He too refashioned the Manor House in Westdean, then moved to Folkington Manor, purchased by the family around 1650. Memorials to the Thomas family survive in the chancel of the church including an alabaster effigy of the first William Thomas.

Gradually the village was rebuilt in greensand stone, brick and flint. From 1813 onwards, the Cavendish family accelerated this development. Barns were rebuilt in flint. The Forge, the Wood Workshop and School were constructed, and the Dairy developed. In 1825, the Manor House – by then a split farmhouse and badly dilapidated – was taken down. A few years later a new Georgian house was built higher up in the village, which is now referred to as Westdean Manor. Later the farm at Westdean was merged with the farm at Exceat. In 1908, the lands were sold by the Cavendish family to the newly founded Eastbourne Waterworks Company who created adits beneath the valley to collect water for the new development of Eastbourne. In 1926, the land around the village was leased from Eastbourne Waterworks Company (later South East Water) to the Forestry Commission on a 200-year lease. The Forestry Commission then began planting a beech forest with peripheral conifers for protection. South East Water now actively manage and protect the forest for the enjoyment of the public. The Friston pumping station and water tower continue to supply the village.

Twentieth century hostilities came to Westdean suddenly with the requisitioning of the farm in World War I and many troops were billeted there before crossing the Channel. A watercolour by Fred Varley vividly depicts their trench training for gas warfare. In the inter-war period Jack Dunfee, a London theatre owner and one of the Bentley Boys, rented the land to keep his horses. He is reported as saying, “There’s war coming and after it there will still be theatres, American or German or English. They will come and I will open them.” World War II saw the Canadians in Westdean. The Van Doos, the 22nd Quebec Regiment, were radio specialists and some of their kit remains. They were the men of the ill-fated Dieppe Raid in 1942 and then left for Juno Beach D-Day landings on 6 June 1945. Part of the Jacobean gatehouse was converted into a radio communication shed and earth wires survive the time since then. Now the conserved building is the location for the village post-box and farm shop.