The Cuckmere is a relatively small river. From its many sources in the High Weald to its estuary at Cuckmere Haven it is 45 kilometres long. The river is likely named after the Saxon word ‘Cuckmere’ meaning ‘fast flowing water’ since it descends over 100 metres in its initial four miles. The river has also been known as the ‘Wandelmestro’, a fitting description of this, equally, wandering waterway. The Cuckmere is the only Sussex river which does not have a port or industrial complex at its mouth. Rather, it heads out to sea through the Seven Sisters Country Park between the white chalk cliffs of Seaford Head and Haven Brow (the last and highest of the Seven Sisters). 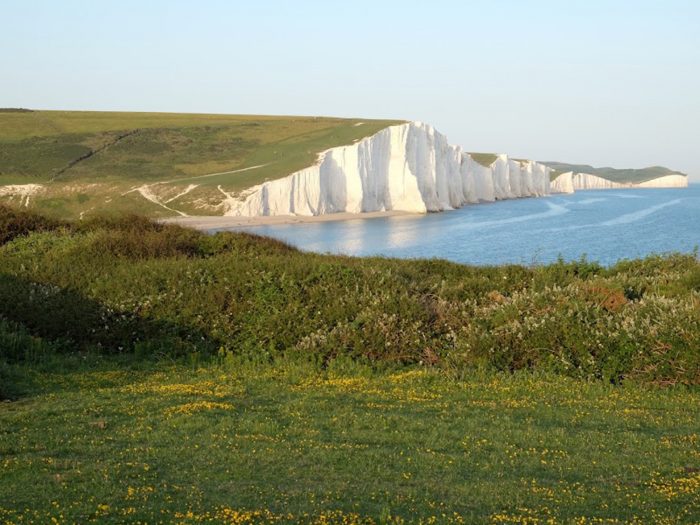 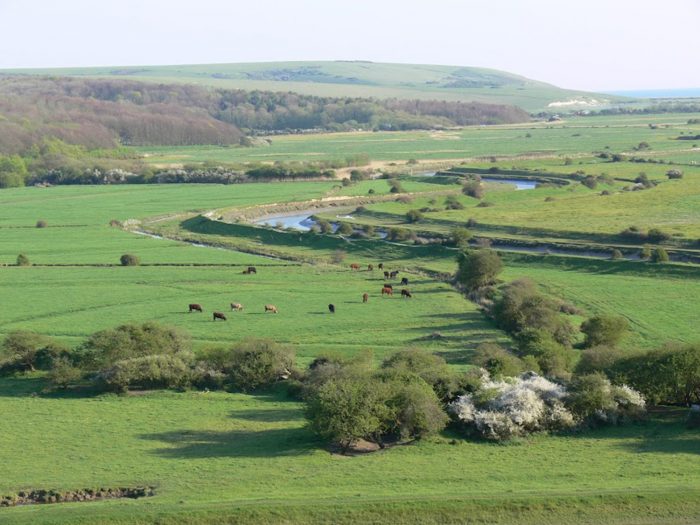 Historically, the river valley has seen many changes. Never deep, the Cuckmere was once a broad, marsh-edged expanse of water with the tide speeding to and fro. Roman colonisers in the third century found it navigable several miles inland. Until the late thirteenth century, when great storms dramatically affected the shoreline of the South East, it probably supported substantial river traffic between the Weald and the coast. Local industries sprung up around this natural phenomenon: salt production, fishing, boat building and salt-marsh sheep farming. Malaria would have been a serious health problem, as it was for all people living near marshes and coastal estuaries endowed with brackish water from Norfolk to the Hamble. Perhaps there is some truth to the local belief that the Cuckmere Valley was one of the last mosquito-infested swamps in Britain. 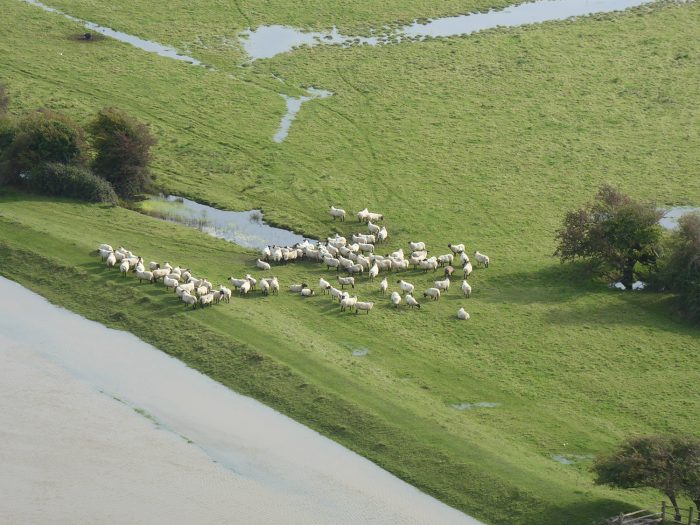 By the sixteenth century the river had been contained. Embankments had been raised to control the tidal flow and the salt marshes had been drained, a process referred to as ‘inning’. However, through a system of sluices, a controlled amount of brackish tidal flow was permitted to flood specific areas of the valley to enable the continued extraction of salt through the evaporation of brine trapped in man-made saltpans. 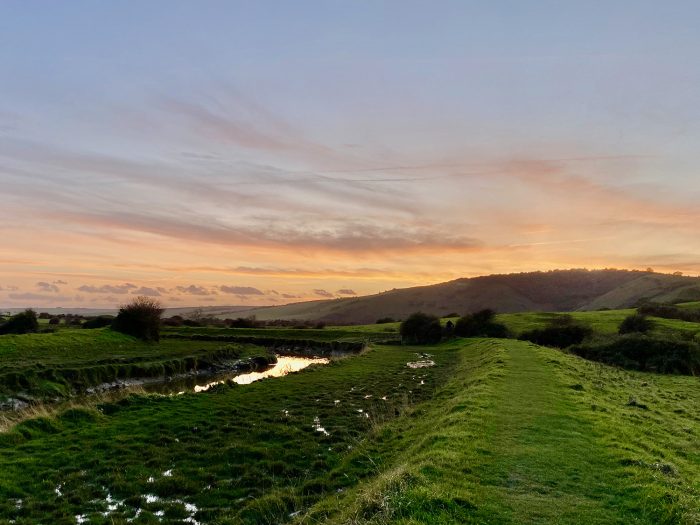 Before 1846, the Cuckmere wound itself through a series of horseshoe bends, from Exceat Bridge to the sea. This distinctive flow pattern was called ‘the Meanders’, after the wending River Menderes in Turkey. These Meanders used to silt-up as a result of longshore drift, the tendency for shingle to be piled up by the prevailing wind and tide. In the Cuckmere’s case, this means a continual shifting of the river mouth eastward towards the Seven Sisters. Eventually, because of the cliffs, the river mouth would block, preventing ships from entering and causing serious flooding upstream.

In the nineteenth century, defensive measures were taken to prevent flooding of the upper valley; shingle was regularly dug from the mouth of the river and the banks were made higher. In 1846, under the direction of Dutch engineers, the course of the river was straightened in an artificial ‘cut’ which bypassed the Meanders below Exceat Bridge. The outfall of the river was maintained in its present position by securing the banks with vertical planks. The effect of longshore drift was reduced with the construction of a concrete sea wall on the Seaford side. Until recently, the cut and the raised riverbanks, or levees, have served to prevent flooding upstream which used to reach as far as the village of Alfriston. Seven Sisters’ Country Park is now famous for its iconic meanders – technically an oxbow lake – now cut off from the main river. However, in recent years flooding upstream has begun again caused by a build-up of shingle at the river mouth that is no longer being cleared. The very gradual sinking of the land following the last ice age combined with rising sea levels due to climate change are also contributing factors. The sea level along the Sussex coast is predicted to rise between one to three metres by the end of the century. Local farmers together with the community are working hard to find solutions to the issue of flooding, which is complex, both environmentally and politically. 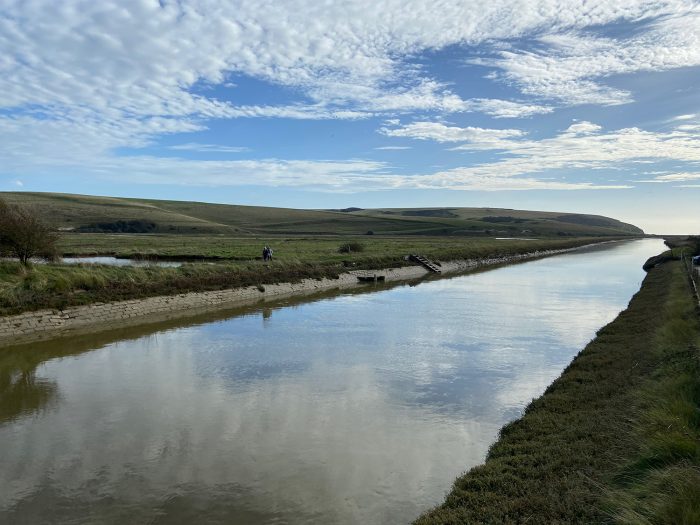 Traditional summer grazing in the river valley is a feature of the local countryside. A complex of interconnecting fresh-water ditches drain and separate the pasture. This dispenses with the need for fences, provides drinking water for stock, whilst also creating a habitat for invertebrate life. This summer grazing has been adversely impacted by recent flooding in the valley. In winter, the river valley floodplains are important for overwintering water birds including teal, wigeon, curlew and snipe. These are occasionally joined by rare species such as white-fronted geese and Bewick swans. 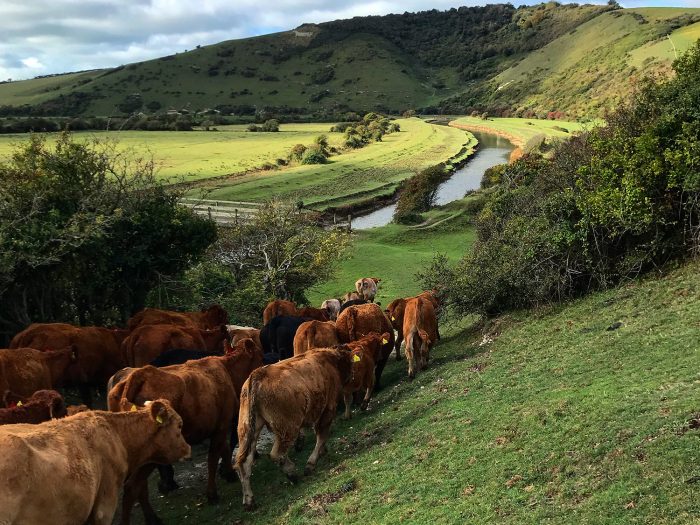 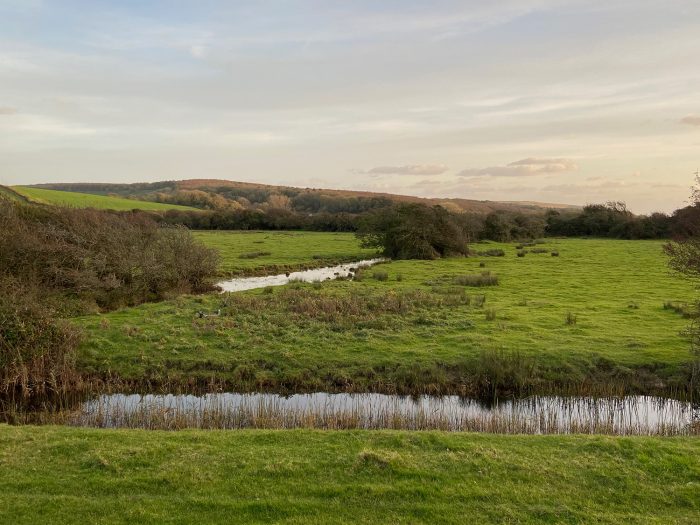 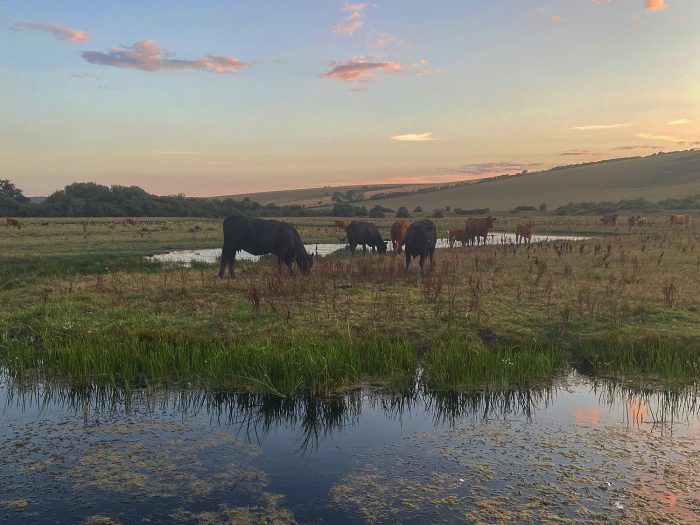 Alongside the river, the migration of toads is a feature of the valley and has been followed by locals for many years. Activity levels were recorded during migrations in the Autumn and Spring of 1960 and 1961. Numbers were then very high, with twenty to forty car-crushed corpses not unusual within the length of the village on any given day. The toad population has fluctuated a lot over the years, crashing at least twice, and has been noticeably low for the last few years. Locals suspect this is due to the prolonged flooding of water meadows (grassland subject to controlled irrigation) during the breeding season. When the brooks are not distinct, spawning occurs in the waterlogged fields with fatal consequences when the water eventually drains away. This is another reason for the community to engage with stakeholders to review the operation and management of the river and ensure the valley drains.