St Michael’s is a very good example of a downland church, built of flint with stone dressings, a white painted weather-boarded wooden belfry tower which supports a broach spire covered with wooden shingles. The main part of the building is thought to have been erected in about 1150, but there are windows in the Chancel which may well be Norman, and the remains of two Norman window openings (since closed) are visible in the North wall of the Nave. The string courses (lines of stone) along the main walls, about nine feet above floor level, are Norman in origin. Interestingly, but inexplicably, the floor falls 13” from East to West. The massive beams which support the main roof are original. Once there were three, but the Victorians removed one close to the Chancel arch, which caused the church to split apart – since rectified by the insertion of a steel tie-bar. The ends of the remaining beams were repaired by the insertion of metal plates in 1993 as they had rotted badly where they sit on the external walls. 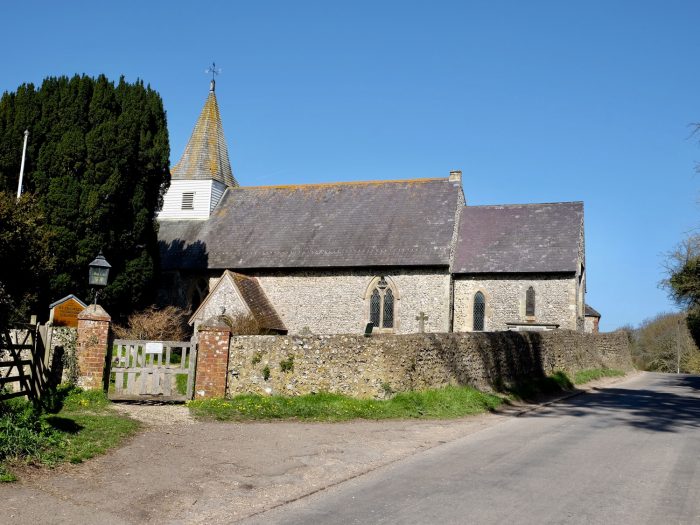 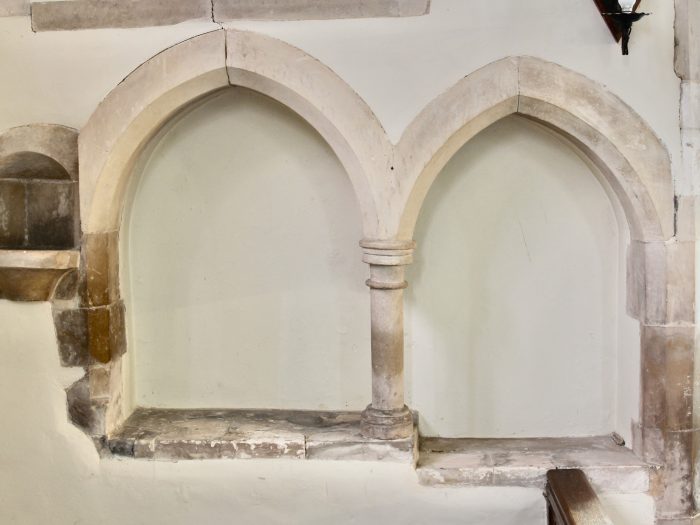 Going back, various alterations were carried out in about 1200, including the insertion of a triple-lancet East window. Between 1300 and 1400 the South porch was added and the Chancel arch re-shaped. At the same time the West end was altered to include the Belfry and Spire, access to which is via a very narrow spiral staircase. The timbers of both the Belfry and the Spire are original. Additional reinforcement and steel bracing were added in 1992 because the Spire was beginning to tilt. Some time between 1500 and 1520 the triple-lancet East window was replaced with the square-headed window which is still in place. The remains of the lancet window are visible externally. The Font dates from the early 1500s, and the original mason’s chisel marks are clearly visible. 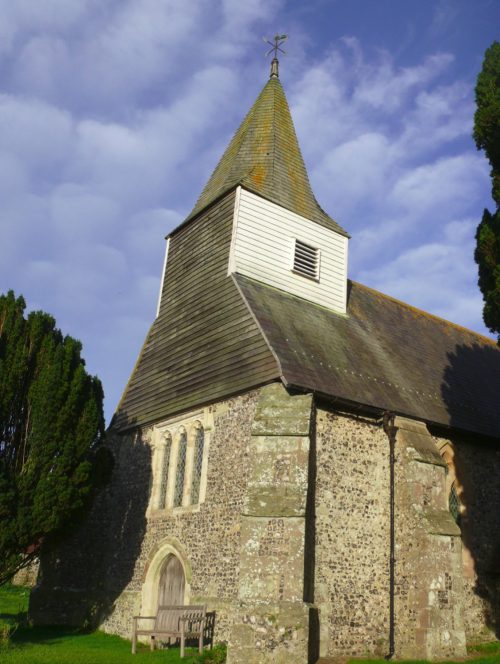 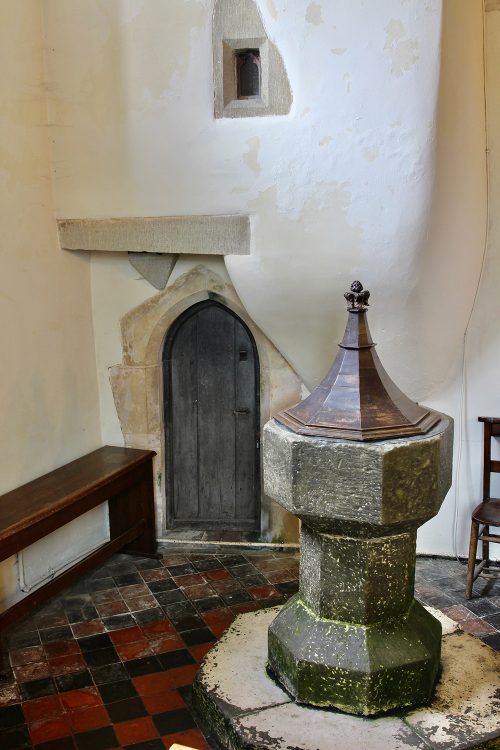 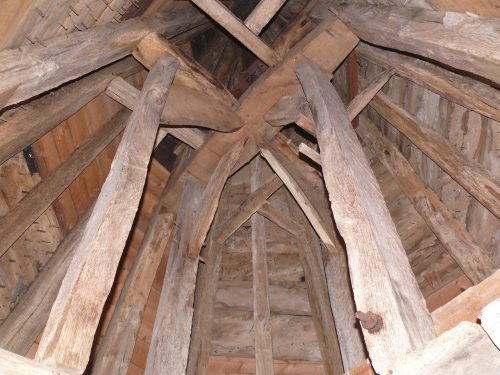 We have three bells, the oldest is the treble, cast at the Whitechapel Bell foundry by William Chambers sometime between 1426 and 1456. It is one of the oldest working bells in the country. It carries the Latin inscription ‘John is my name’. The tenor was cast somewhere outside Canterbury and says ‘John Palmar Made Mee 1651 Joseph Glid Warden’. The ‘N’ in ‘Warden’ is cast back to front. The bass bell was cast by John Saunders of London some time in the 1550s. The bells were turned and re-hung in their original positions in cradles rather than in their original wheels by the Whitechapel foundry in about 1962 – so we have clocked up a bit more than 500 years as customers! 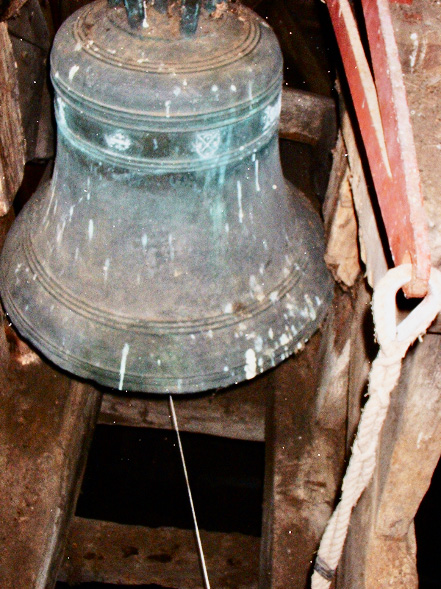 Some excitement was stirred up when, in 1586, ‘A greate part of our church wall fell down.’ We do not know which bit this was, but the heavy buttressing at the North-west corner could indicate structural problems. Whether the buttresses date from then, or from earlier in that century is unknown.

There is a late fifteenth century ‘scientific’ sundial carved into the stonework on the South-east corner of the porch, and two circular mass sundials on the North-west corner of the main building, each having 24 divisions. 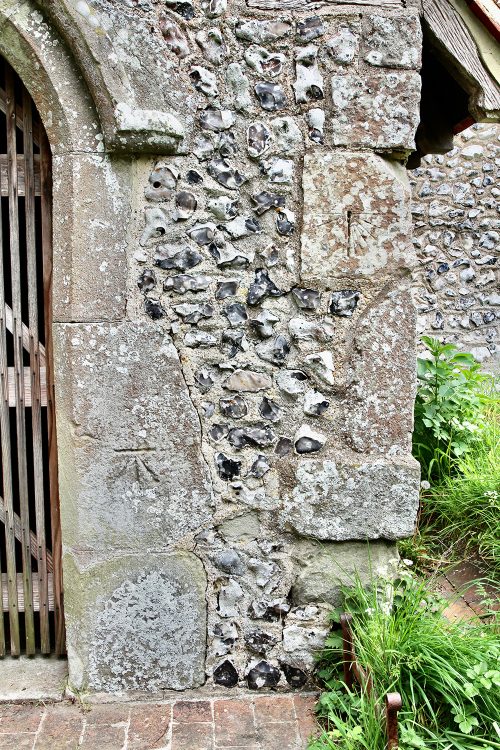 The church remained unaltered thereafter, until 1863 saw extensive renovations. These were made possible by a £600 bequest from Stephen Phillips, whose niece Emma Phillips married the Rev’d Richard White, who was curate here, becoming Rector in 1862. Stephen was a Bristol born builder, developer and magistrate who lived in West London. His bequest was for the restoration of the church and the provision of ‘a suitable monument to me.’ The highly coloured glass in the East window is that memorial. 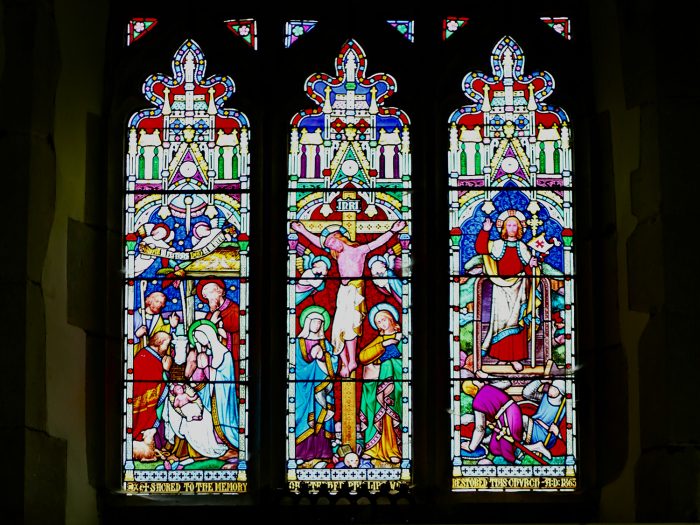 These works included the construction of the Vestry; the reconstruction of the Chancel arch, using the original stones and preserving its fourteenth century form; tiling the floor with Minton tiles; the insertion of two large windows in the Nave, one in the North wall and the other in the South wall near the West end (not the one by the Pulpit, which is ancient); the removal of the Rood screen and the beam near the Chancel arch – the consequences of which are described above; alterations to the Pulpit, and the insertion of stained glass in the East window. The pews were installed by public subscription in 1939.

Charles La Trobe, the first Lieutenant-Governor of Victoria, Australia, ended his days at Clapham House in the village, and is buried in the churchyard. We have close links with the La Trobe Society in Melbourne.

The church has been Recorded by members of the Fine Art Society, Eastbourne. An illustrated book recording the contents and history of the church was presented to the Rector in 2009. A copy is held at the Victoria and Albert Museum, London. Church Recording promotes recognition and preservation of the rich artistic heritage of places of worship of all denominations. 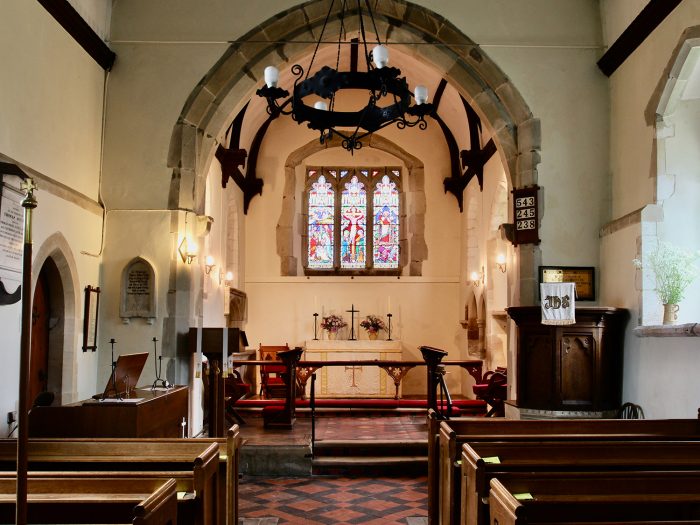