Chalky downland soil is not in itself productive agriculturally but, historically, the addition of dung from sheep grazed when not cropping has significantly improved fertility. The use of sheep as ‘moving dunghills’ that trod in their own manure came early to the Downs. Managed together, the downland, arable and river meadows of the Cuckmere offered a sustainable existence to the first farmers. There are still traces of ancient land divisions running on an east/west axis down the sides of the Cuckmere Valley. Each broad strip includes downland grazing, more fertile land on the foothills (where the chalky soil has benefited from centuries of topsoil washed down from the hills), and riverside meadows. This ‘linear landscape’ may have its origins in the Bronze Age. 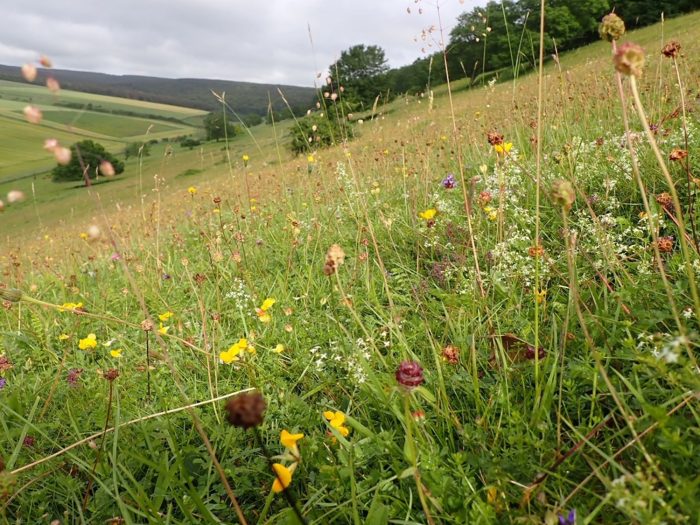 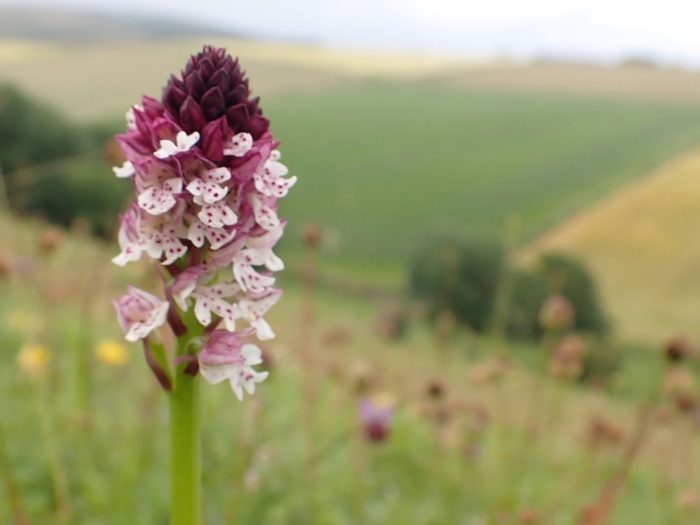 From the Middle Ages, however, economic drivers saw a move away from this small-scale, mixed model of farming on the Downs. Over the centuries there were frequent changes back and forth between arable and pasture. During the 1300s the Downs were converted from arable land to sheep pasture as the Continental demand for wool and woollen goods grew. At the end of the eighteenth century demand for grain, created by the Napoleonic Wars, resulted in large areas of the downland being ploughed up again. The repeal of the Corn Laws in 1846 encouraged many farmers to revert back from arable to grass, and so the chalkdown grasslands increased in size. Many that exist today date back to these changes in the mid-nineteenth century. Imports of cheap wool and mutton from New Zealand towards the end of the 1880s made sheep farming less profitable and by the time of the First World War sheep numbers were down to about a third of their original levels. The reduction in grazing allowed the encroachment of scrub, mainly gorse, elder and bramble. The need for cereals in the First and Second World Wars resulted in more downland being ploughed, and in 1945 government grants providing subsidies for cereal farming further impacted many remaining areas of old chalk grassland. After the First World War, cheap artificial fertilisers meant that cereal growing on even the poorest land became more profitable than rearing sheep. Chalk grasslands began to disappear except on the steeper slopes which were impractical to plough. Without a grassland phase between ploughs, soil on the cultivated parts of the Downs became heavily degraded turning into dustbowls during the droughts of the 1970s. Scrub invasion on the remaining grassland slopes continued during the post-war period due to reduced grazing and the decimation of the rabbit population from 1953 with the arrival of myxomatosis.

In 1947 the South Downs was among twelve areas recommended for designation as a national park in England. In 1956 the National Parks Commission noted extensive damage to the chalk downland from cultivation and voted against further work on designation, despite their stated aim of protecting what remained. It did, however, recognise the ‘great natural beauty’ of the area and in 1966 designated the Sussex Downs an Area of Outstanding Natural Beauty (AONB). Along with East Hampshire AONB, this formed the basis of the South Downs National Park (SDNP), finally designated in 2010, making it England’s newest national park. The SDNP has a statutory duty to ‘conserve and enhance the natural beauty, wildlife and cultural heritage of the area’. Chalk grassland now covers just four per cent of the Park’s area and the Park Authority is working with a range of local farmers, land managers and environmental partners to protect what remains and reverse the decline of recent decades.

Each year volunteers clear invasive scrub and collect local grassland seeds to propagate. In sensitively grazed areas of chalk grassland you can now find up to forty species of flowering plants in one square metre during the spring and summer, and over thirty species of butterfly can be on the wing at any given time. One of the most treasured inhabitants of the South Downs, the brilliantly coloured Adonis Blue butterfly, has made a recovery. The caterpillars feed on the leaves from just one plant, the Horseshoe Vetch, and the adult butterflies lay their eggs under the plant’s leaves. Like most of the other small wildflowers that brighten the grasslands, Horseshoe Vetch benefits from the short turf created by grazing sheep as this keeps the longer grasses in check that would otherwise eclipse its struggle for nutrients and sun. However, grazing must be intermittent and at different times each year, so the new emerging seedlings have a chance to mature. Greatly declined species such as the Duke of Burgundy butterfly also benefit from mixed patterns of interrupted grazing. This gives its caterpillars a chance to feed on the leaves of Cowslip, so-called as they tend to germinate in the exposed soil created by cow’s hooves slipping in open pasture. Again, cowslips can only flourish if grazing is not continuous or at the same time each year.

Areas of chalk grassland can be found at Lullington Heath, Deep Dene and Windover Hill, as well as on the Cuckmere Valley slopes near High-and-Over and at Exceat.